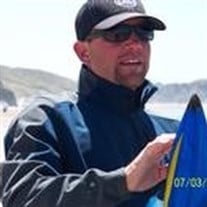 William "Spike" Douglas Armstrong Jr., 37, of Medford, OR. passed on April 14, 2011. He was born July 5, 1973 in Antioch, CA. Spike married June "Dusty" Irene Lacey on December 27, 1993. They had four children, Jessica, Jeremiah, Joseph, & Jonathon. He worked as a millwright for Care Stream Health Inc. since 1997. He was an active member of the South Valley Church and assisted in many youth acivities with South Valley Church and the Rogue Valley Adventist Academy. Spike was an umpire for the Medford National Little League. He enjoyed riding his motorcycle, boating, hunting, camping and was a proud family man. He is survived by his wife, children, two sisters; Becky Lynette Armstrong of Martinez, CA. and Paula Marie Gibson of Oregon City, OR., his parents; father William Douglas Sr.& wife Gail Armstrong of Pittsburg, CA. and mother Sandra Lynn Swafford of Bandon, OR. Memorial Services will be held Saturday, 3:00PM, April 23, 2011 at the 7th Day Adventist Church, 1900 Greenwood St. in Medford, OR. Hillcrest Memorial Park & Mortuary, Medford, OR. are in care of the arrangements, 541-773-6162. www.hillcrestmortuary.com

The family of William Douglas "Spike" Armstrong created this Life Tributes page to make it easy to share your memories.