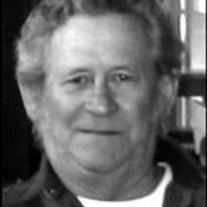 William "Bill" Franklin Madden passed away in his home on Tuesday, May 19, 2009. Born December 24, 1937 in Medford, Ore., to Ernest and Florence Madden, he spent most of his life in the Rogue Valley. Bill lived on his family's farm in Phoenix, Ore., Madden Orchards, throughout his childhood with his three brothers, Marvin, Roy and Bob where they raised crops of peaches, vegetables, hay and some livestock. Bill made the farm his home again in 1986 and spent his remaining years there as a well-known member of the community. A class of 1956 graduate of Phoenix High School, Bill was known as a talented athlete. He enjoyed all sports but earned local star-status for his grace on the basketball court. Bill then went on to Skyline College in the Bay Area and played college basketball. Soon after, he moved back to Phoenix where he learned the carpentry trade by apprenticing for his uncle, Curtis Stockstill. It was at the beginning of his working career that he met his wife, Shirley Dunlap of Jacksonville, Ore. They married in 1959 and their first daughter, Rita, was born in 1961, followed by the birth of their first son, William "Billy" three years later. Not long after, the family moved to Sacramento, Calif., where Bill worked for Peter Kewitt Company on large-scale commercial and infrastructure projects, including the Bay Area Rapid Transportation rail-system. He also enjoyed playing baseball for a local city baseball team. In 1972, their daughter, Joanna, was born and the Maddens spent two more years living in Citrus Heights, Calif., a suburb of Sacramento, before moving back to the Phoenix area where their youngest daughter, Dawn, was born. Bill later began working with his brother, Roy, eventually forming Madden Construction and spent the remainder of his career on many of the area's commercial and residential building projects until his retirement in 2002. Bill's youngest son, Dustin was also born in Medford. He is survived by his daughters, Rita Roberts and Joanna Madden; son, Dustin Madden; and grandchildren, Jacob Roberts, Elliott Ashmore, Coral and Taven Madden. Bill has been an active supporter of his family's participation in 4-H, a Moose Club Member and Carpenter's Union Member. His lifelong love of sports, classic cars, current events, the weather and country music was well-known. Friends and family loved Bill for his unique sense of humor and easy-going approach, with "I'll get a guy on it" as his oft-stated mantra. He has spent his retirement years enjoying an active social life, visiting his children and grandchildren and staying connected to friends and extended family. Funeral services will be held Saturday, May 23, 2009 at Hillcrest Memorial Park Chapel, at 11:00 a.m. Memorial donations can be made to The American Cancer Society. Arrangements by Hillcrest Memorial Park and Mortuary, Medford, Ore. (541)773-6162 www.hillcrestmortuary.com

William "Bill" Franklin Madden passed away in his home on Tuesday, May 19, 2009. Born December 24, 1937 in Medford, Ore., to Ernest and Florence Madden, he spent most of his life in the Rogue Valley. Bill lived on his family's farm in Phoenix,... View Obituary & Service Information

The family of William Franklin Madden created this Life Tributes page to make it easy to share your memories.

William &quot;Bill&quot; Franklin Madden passed away in his home on Tuesday,...

Send flowers to the Madden family.