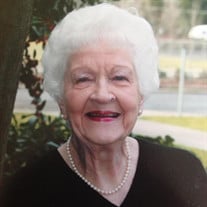 Wanda Deone Harper Hanson Died on December 21, 2021, at the age of 101 of natural causes. Wanda was born in Salt Lake City, UT on December 11, 1920. She is survived by her two children Ronald K. Hanson of Cupertino, CA (wife Lynne) and Shirley J. Hanson of Pleasant Hill, CA, and her sister-in-law, Marilyn Malvey of Reno, NV. In addition to her children, she is survived by her grandchildren: Steven Hanson (wife Kamini, son Ford) of Alamo, CA, Andrew Hanson of Austin, TX, Ryan Hanson of Saratoga, CA, and Kristine Jackson of Provo, UT (husband Doug, 6 stepchildren and 9 grandchildren). She was preceded in death by her former husband - Thomas N. Hanson, grandmother - Sarah E. Harper, grandfather - Alfred P. Harper, and stepbrother - Michael J. Malvey. Wanda lived in Lafayette and Walnut Creek, CA before moving to Oregon in 1953, initially to Shady Cove, subsequently to Eagle Point and Ashland, and finally settling in Medford where she has resided since 1970. Wanda retired as the Personnel Director of the VA Hospital in White City, OR and was active in the professional women’s organization, Zonta. After her retirement she worked for Ann Rice Realty and then Hydro-Flow until she was 80, when she volunteered to work at the Central Point Latter-day Saint Temple. She was always active in the Church of Jesus Christ of Latterday Saints and served as the Stake President’s Secretary for 45 years, a calling she treasured. Our family considered Wanda a saint. Everyone who had the privilege of knowing Wanda knows what an exceptional person she was. The first thing her friends and acquaintances would say as they greeted her visiting family was “Do you know what a special woman your mother/grandmother is?” She was loved by everyone. Wanda had a way of cheering you through her ever-happy, positive demeanor. She accepted every person she met as a friend, seeing the best in everyone. She focused on every person she interacted with, learning all about them and with her remarkable memory was able to recall those personal facts throughout her 101 years. She was always a lady, a model of the high standards that she encouraged in others by her sweet, loving example. We will miss her but know she is shining her light on each of us, her job well done. A Memorial Service will be held Saturday, January 15, 2022, at 11:00 am at the Church of Jesus Christ of Latter-day Saints,3150 Juanipero Way, Medford, OR 97504. For those who wish to dedicate a gift in Wanda’s memory go to: ACCESS-the Community Action Agency of Jackson County

Wanda Deone Harper Hanson Died on December 21, 2021, at the age of 101 of natural causes. Wanda was born in Salt Lake City, UT on December 11, 1920. She is survived by her two children Ronald K. Hanson of Cupertino, CA (wife Lynne) and Shirley... View Obituary & Service Information

The family of Wanda Deone Hanson created this Life Tributes page to make it easy to share your memories.

Send flowers to the Hanson family.