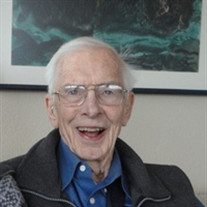 Walter Howard PAGE had quite a life, "a long trip. A beautiful trip," as he put it as his life was nearing its end. He was born in Seattle, Washington on August 30, 1917 to Clarence Leslie Page and Alice Haven Page, attended Ravenna School, graduated from Roosevelt High School in 1935, then went to the University of Washington, where he found fast friends in the Sigma Alpha Epsilon Fraternity and raced with the U. of W. Ski Team. It was then that he married his lifelong mate Genevieve Schroeder. They shocked everyone by eloping on September 11, 1938 while still undergraduates; Walter graduated in 1939. The couple moved to Salt Lake City where he worked at Norman S. Wright Co., until 1942. Stephen Haven Page was born there on August 9, 1941. Back in Seattle, Walter and Gevie moved to 42nd street in Laurelhurst; Leslie was born on April 1, 1944 and Walter gave his managerial and engineering talents to Tecler Aluminum Company, 1947-1957, then he went to work for United Control, 1957-1968. in the meanwhile moving to Clyde Hill in Bellevue in 1949 - 1983, to a house built by John Hill at 2009-94th NE. That's where Steve and Leslie grew up, before they married and left home. In about 1976, Walter and Gevie bought a cabin on Lopez Island's Fisherman's Bay Peninsula that they have decided to keep in the family. This has been, and will be, the site of many gatherings of friends and family. Walter moved on to work for Laucks Labs, 1968-1971, GradLine, 1971-1977, and then with Gevie at General Travel, while working as a business consultant until about 1983. The YMCA of Greater Seattle awarded Walter the annual appreciation award for outstanding service in 1976, in the form of a plaque 'for service to youth.' Then came the big move to Sun Valley, where they lived from 1989 to 2005, settling in to Elkhorn, skiing, and providing hospitality to their children, grandchildren and friends. This was a wonderful time. There, Walter put his community energies into the Ancient Skiers and the Sun Valley Historical Society and Museum. The Rogue Valley Manor was another good choice of residence - in two cottages and two apartments before the Special Care Center and Health Center, they had final years among old and new friends and loving caregivers. All of his life, Walter was part of organizations that he believed in; he was part of neighborhoods, part of communities (Shout n' Shuffle, the Saturday Club, Ancient Skiers, Fisherman Bay Peninsula Property Owners Association, YWCA, Rotary, Sun Valley Historical Society Heritage and Ski Museum, Lopez Island Historical Society and Museum). . . . He bore tragedies with great strength and dignity, notably the death of his brother Clarence in 1938 and the death of his son Stephen in 2001. Walter's greatest attachments were to Genevieve, to his family, and his friends. And then came nature: the wind, the snow, the mountains, and water. For this reason, the two poems below found in specially marked files were read at his service at the Rogue Valley Manor on July 22, 2014. Walter Howard Page leaves us bereft of a wonderful man, whom we recognize by his love, his compassion, and his generosity. He passed away on July 17, 2014 and is survived by his wife Genevieve; his daughter Leslie Page Moch; his grandchildren Christopher Haven Page of Bellevue ID, Alexandra Page Henning of Bellevue WA, and Sarah Berwald of St. Paul, MN; great-grandchildren Nicholas Haven Henning, Cathleen Markee Henning, and Niels Berwald. CROSSING THE BAR Alfred, Lord Tennyson Sunset and evening star, And one clear call for me! And may there be no moaning of the bar, When I put out to sea, But such a tide as moving seems asleep, Too full for sound and foam, When that which drew from out the boundless deep Turns again home. Twilight and evening bell, And after that the dark! And may there be no sadness of farewell, When I embark; For tho' from out our bourne of Time and Place The flood may bear me far, I hope to see my Pilot face to face When I have crost the bar. NATIVE AMERICAN PRAYER I give you this one thought to keep - I am with you still - I do not sleep I am a thousand winds that blow I am the diamond glints on snow I am the sunlight on ripened grain I am the gentle autumn rain. When you awaken in the morning's hush, I am the swift, uplifting rush Of quiet birds in circled flight. I am the soft stars that shine at night. Do not think of me as gone - I am with you still - in each new dawn.

Walter Howard PAGE had quite a life, "a long trip. A beautiful trip," as he put it as his life was nearing its end. He was born in Seattle, Washington on August 30, 1917 to Clarence Leslie Page and Alice Haven Page, attended Ravenna School,... View Obituary & Service Information

The family of Walter Howard Page created this Life Tributes page to make it easy to share your memories.

Walter Howard PAGE had quite a life, &quot;a long trip. A beautiful...

Send flowers to the Page family.