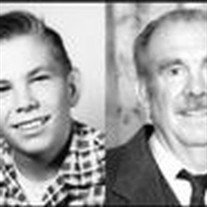 Timothy "Tim" D. Caswell Sr. Timothy D. Caswell Sr., went to be with his Lord, Saturday March 24,2007, holding hands with his dear wife of 42 years, Freda Marie Caswell. Mr. Caswell's nearly 4 year long battle with cancer came to an end at home. Both of his sons, a sister, 2 granddaughters and other extended family also were present, singing hymns and praying over him as he was welcomed into his Father's arms. A visitation will be held at the Hillcrest Memorial Park Chapel from 4-7 p.m. on Thursday March, 29. A memorial service will be held Sunday April 1, 3:30 p.m. at Cornerstone Christian Church, 608 N. Bartlett St., Medford, Ore 97501 Mr. Caswell was born May 3, 1943, in Glendale, Calif., to Robert and Ruth Caswell. As a young boy, his family moved to Dunsmuir, where he enjoyed the company of many special friends. One of these friends came to relive their childhood adventures just hours before Tim passed. Tim graduated from Dunsmuir High School in 1961. He married the former Freda Marie Bollinger on November 28, 1964, in Van Nuys, Calif. Shortly after completing his service in the USAF during the Vietnam War, where he was stationed primarily at Travis AFB, the young family moved to the Rogue Valley. Mr. Caswell began his career as a Firefighter with the Ashland Fire Dept. in 1972, retiring in 1997 as an engineer. In retirement, he enjoyed the company of his grandchildren. In addition to camping and going to the Oregon Coast, he invested considerable time as a volunteer for the American Red Cross blood bank and with various church related outreaches such as: Child Evangelism Fellowship, the AWANA Youth program, and Cornerstone Christian Church's Inner-City Ministry. Up until last August, Tim also participated in the care of his father-in-law, Robert L. "Poppy" Bollinger, who was one of the four generations living in the Caswell home. Tim was a devoted family man. His wife is thankful for his love and friendship. His sons are greatly appreciative of the time their father invested in them and the godly example he lived before them. His grandchildren benefited from his enthusiasm for learning and teaching. Tim's family, neighbors and friends were the common beneficiaries of his selfless acts of service. Tim's consistent yet gentle walk with Jesus was an inspiration to many. His faith remained solid to the end...his confidence in his Lord unwavering. He is survived by his wife, Freda, sons, Tim Jr. and Matt, 6 granddaughters, and one grandson. He is also survived by two sisters, Noralyn Hansen of Nampa, ID and Leah Caswell of Billings, MT. Mr. Caswell was preceded in death by his parents, and two brothers: Robert of Medford, Ore. and Patrick of Redding, Calif. Hillcrest Memorial Park is in charge of arrangements. In lieu of flowers, donations can be made to: CEF, PO Box 4484, Medford, OR 97501; Medford Gospel Mission, 125 W. Jackson St., Medford, OR 97501.

The family of Timothy D. "Tim" Caswell created this Life Tributes page to make it easy to share your memories.