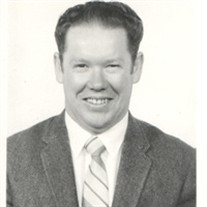 Terence J. Green, 79, of Gold Hill, Ore. passed away May 21, 2014. He was born June 13, 1934 in San Francisco, Calif. to Melville and Jane Green. He married Donna, who survives, November 13, 1993 in Dumfries, Va. Terry was a resident of the Rogue Valley for one year after living in Oakland, Ore. for 14 years prior. He served in the U.S. Navy and later had careers in law enforcement with the Atherton, Calif. P.D., Oakland, Calif. P.D., and the F.B.I. He also enjoyed photography and writing. In addition to his wife, Terry is survived by his sons, Terry Jr., Dan, Mike, John, and Tony; daughters, Kathy and Eleanor; 14 grandchildren; and two great-grandchildren. A memorial service will be held at 2:00 p.m. Saturday, May 31, 2014 at Hillcrest Mortuary. Father Arturo Romero, of Sacred Heart Catholic Church, will officiate. Arrangements in care of Hillcrest Mortuary, Medford, Ore.

The family of Terence Joseph Green created this Life Tributes page to make it easy to share your memories.

Send flowers to the Green family.