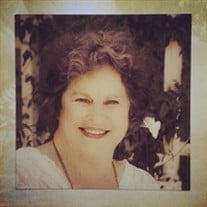 Born May 29, 1934 in Inglewood, CA Entered Heaven on August 15, 2014 Shirley Jean Worthington was a beautiful woman of great faith who loved the Lord and His Word with all her heart. Shirley was the daughter of Robert Francis Foster and Lillian Leigh (Leslie) Foster. She was born on May 29, 1934, in Inglewood, CA. She married her high school sweetheart, Edward Lyle Worthington in 1950, and together they had four children, Ed, Bob, Karin and Christi. Shirley lived in both California and Oregon during her lifetime. She loved the beauty of Oregon and often talked of how it reminded her of Big Bear, CA, where she met and married her husband. Together they moved with their children to Oregon and that is where she spent many happy years. She moved back to California in 2003 and was happy there throughout the remainder of her life. Shirley's prayers were an integral part of her daily life. She loved her family and prayed fervently for each family member everyday. She attended church faithfully during her lifetime. She read God's word and shared scripture readily with others. She would often share meaningful verses, which spoke deeply to her, with those who needed a word of encouragement. She had many dear friends, and anyone who knew her, loved her for her sweet spirit and kindness, as well as her quick wit. She was loved by all who had the privilege of knowing her. Shirley had a passion for writing and often journaled her thoughts and prayers. She loved to write and was able to complete her life story over the past few years, which her children and family will cherish forever. Travel was another one of Shirley's passions. She enjoyed travel with family and took many trips with her husband and children, often camping in the summers. She also enjoyed travel with her sisters later in life. One of her favorite and most beloved places in the world was England. She loved all things British and she became quite the expert in English teas and royalty. In fact, on one trip to England, she even saw the queen! She traveled to China in 2003 to accompany her daughter, Christi, as she welcomed her second daughter from China, into the family. Shirley Jean Worthington loved her family with all her heart. Shirley was preceded in death by her beloved husband, Edward, in 1974. She is survived by: her children Edward Lyle Worthington, Jr. and his wife, Terry and their sons Edward and Brian; Robert Lee Worthington and his wife, Donelly and their daughters McKenzie and Alyson; Karin Leslie Worthington (Kinney) and her husband, Rob and their children Dean, Tai and Kacie; and Christi Lynn Worthington and her daughters Paige and Claire. Shirley was blessed with, and survived by four great-grandchildren as well: Tenille, Hunter, Morgan, and T.J. She is also survived by sisters Teri Foster and Sheila Freier and their families. Because of her love for dogs, Shirley would also want all to know that she is survived by her sweet and spunky dog, Spencer William Worthington. Private services to celebrate the life of Shirley Jean Worthington will be held in Menifee, California and Medford, Oregon. Memorial gifts may be sent to: **Holt International Children's Services at: http://www.holtinternational.org/ Gifts designated to: The Shirley Jean Worthington Memorial Fund (Four of Shirley's granddaughters were adopted through Holt International) **American Heart Association at: http://www.heart.org/HEARTORG/

Born May 29, 1934 in Inglewood, CA Entered Heaven on August 15, 2014 Shirley Jean Worthington was a beautiful woman of great faith who loved the Lord and His Word with all her heart. Shirley was the daughter of Robert Francis Foster and Lillian... View Obituary & Service Information

The family of Shirley Jean Worthington created this Life Tributes page to make it easy to share your memories.

Send flowers to the Worthington family.