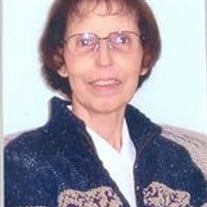 Sharon Loraine (Mielke) Fischbeck Sharon Loraine (Mielke) Fischbeck, 69, passed on to the next life on March 13, 2010 in Springfield, Ore. She was born to Waldo William Mielke and Florence Ellen (Sanford) Mielke on Nov. 10, 1940 in Hollywood, Calif. The family moved to Medford, Ore. June 1941 when she was seven months old. She has two sisters Eloise Marilyn Despain (Marwin) of Central Point, OR., and Mary Lou Whittier (Dee) of Blackburg, Va. a son Gerald Wilben Mielke (Jean) of Fort Jones, Calif. Sharon married Lawrence Anthony Fischbeck on February 8, 1962 in Medford. They had three children Sandra Marie (Fischbeck) Hare (Kevin) of Talent, Ore., Tammy Diane (Fischbeck) Westbrook of Eugene, Ore., and Anthony Earl Fischbeck who preceded her in death at the age of six. She graduated from Medford High School and later from beauty school. She was a member of the Church of Jesus Christ of Latter-day Saints her whole life and served in many callings as teacher and secretary in several organizations. She loved to go to the temple where she found peace and contentment. She worked at Sasco Fasteners as a bookkeeper for many years and loved her co-workers so much. The management, Steve and Cheryl Dunham, were like family to her. She was a Girl Scout leader for many years. Sharon was always such a sweet and loving person, wanting to help and make people happy. She was preceded in death by her husband Lawrence; and their son Anthony; her parents; and Lawrence's parents Opal and William F. Sr. Planer. She will be missed by many friends, family (mentioned above); many nieces and nephews; two granddaughters, Amanda Marie Hare and Hanah Marie Hare. Services will be held Friday, March 19, 2010 at 1:00 p.m. at Hillcrest memorial Chapel. Arrangements are by Hillcrest Memorial Park and Mortuary, Medford, Ore., 541-773-6162, www.hillcrestmortuary.com.

The family of Sharon Fischbeck created this Life Tributes page to make it easy to share your memories.

Send flowers to the Fischbeck family.