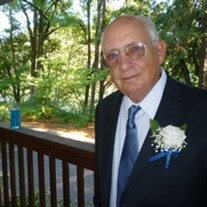 RogRoger LeeRoy Leatherman, 74, passed away at his home on August 4, 2013. He was born in Baker City, Oregon to Osie Holt and Thomas Leatherman January 15, 1939. While his dad was serving in WWII, Roger lived with his aunt Nora and uncle Harold Hutchins in Klickitat, Wash and Ashland, Ore. He returned to his dad in Lebanon, Ore to start second grade and graduated from Lebanon High School in 1957. Roger was active in school activities, government, and played football, basketball, and baseball earning special athletic awards. Roger returned to Ashland and the Hutchins' to attend Southern Oregon College. On a Friday night he met Sylvia Morris while cruising Medford's gut from Cubby's to Jacks and married her in 1961. Roger graduated with a Bachelor of Science in 1962. They moved to Brownsville, Ore and he taught chemistry at Central Linn for three years. Roger's next job lasted 28 years in Medford teaching math. He taught in a portable classroom on the front lawn at the high school and later moved to a new room on the campus of Medford (North) High School. Although Lebanon was his stomping grounds, he quickly learned to navigate the entire Rogue Valley during his early job with the Jackson County Vector Control. Camping, water skiing, salmon fishing, and reading were 'family' activities. Later Roger joined the Rogue Valley Country Club and played a very decent game of golf winning awards in partner and couples golf tournaments. He was very adept at home repairs, taking items apart and reassembling them, and he would tackle any job knowing he could fix it. Roger could recall facts, historical events and dates, and never forgot names and details of life stories people told him. He was a walking calculator and a very good 'self' financial advisor. Roger was his own man. He liked to hear the truth and didn't bother with people who fudged. He thought everyone should try hard to be the best they could be. No slackers were allowed. He liked to joke with his students and enjoyed their enthusiasm. He did have an answer for everything. And he was right. In the 1970's, he started cooking. His meals were numbered because he never followed a recipe and no one complained about any meal, for fear he'd stop cooking. A hiking trip to the top of Mt. McLoughlin, a Panama Canal cruise, and walking Bourbon Street in New Orleans were special events to Roger. In 1980, an annual trip to Reno with high school chums Judy and Gary Storey began. By 2012, two spry young couples turned into gray-haired walkers, what a foursome to conquer Reno. After retirement in 1993, a trip to Palm Springs turned into a steady habit during the winter months. Many friendships were formed at Smoke Tree Resort where life was good and all the world's problems were solved sitting around the pool. Roger and Sylvia, his wife of 52 years, had two daughters, Lisa Peterson Leatherman and Lori Dingler. Lisa (John Fletcher) has a son Matt Peterson and a daughter, Jessica Peterson Raines (Jeff) and they have three daughters, Cydney, Abbi, and Lexis, and a boy Jordan is due in December. Lori (Jeff Dingler) had two sons Andy Dingler and Ryan Dingler. Lori lost her battle with cancer in 2008. Roger's other relatives include his stepmom Thelma and her son Don Beaton and an adopted sister Darlene Leatherman Bentley. Roger's mother Osie had two other sons Barry and Kevin Compton. A private service has been held. We will miss him and his never-ending opinions about life.

RogRoger LeeRoy Leatherman, 74, passed away at his home on August 4, 2013. He was born in Baker City, Oregon to Osie Holt and Thomas Leatherman January 15, 1939. While his dad was serving in WWII, Roger lived with his aunt Nora and uncle Harold... View Obituary & Service Information

The family of Roger Leroy Leatherman created this Life Tributes page to make it easy to share your memories.

RogRoger LeeRoy Leatherman, 74, passed away at his home on August...

Send flowers to the Leatherman family.