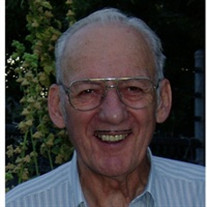 Robert S Ashenberner passed away November 7, 2012. He was born February 17,1925. He was preceded in death by his wife, Genevieve of 65 years. She died July 30, 2009. Robert distinguished himself in World War II at the Battle of the Bulge. He... View Obituary & Service Information

The family of Robert Samuel Ashenberner created this Life Tributes page to make it easy to share your memories.

Send flowers to the Ashenberner family.