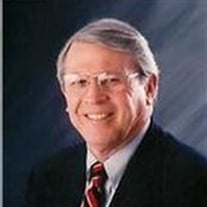 Richard Frank Hensley, a longtime Medford resident, passed away on June 21, 2011 at his home in the Rogue Valley Manor. He was 80 years old. Richard, the only child of Frank and Queene Hensley, was born in Asheville, North Carolina on November 9, 1930. He lived in Asheville until he was 13, when the family moved to Los Angeles, California. He graduated from Inglewood High School, Pepperdine College, and did his graduate studies at the University of Southern California. Following college, he taught high school and coached in Los Angeles. He married Ann Durno in Medford on July 3, 1953. After a 2-year stint in the U.S. Army in San Antonio, TX, Richard and Ann moved to Medford where he started working for Medford Concrete Construction Company. He worked there until forming his own company, Tru-Mix Construction Company, in 1972. He was, also, Director of the Oregon Concrete & Aggregate Producers Association. In 1988, Tru-Mix combined forces with Lininger Construction to form LTM Incorporated and Rogue Aggregates. Richard served as President and CEO of LTM and as Chairman of the Board of Rogue Aggregates, both of Medford. These companies were then purchased by Terra Industries, Inc. in 1992 and Richard retired in 1993. Throughout his life in Medford, Richard was involved in numerous local clubs including the Shriner's, Rotary, the Southern Oregon Tennis Club, the Rogue Valley Country Club, and the Rogue Valley University Club. He served on many local and state boards and committees including American Field Service, YMCA, Salvation Army, the Medford School District, and the Jackson County Republican Central Committee. He served on the boards of U.S. Bank, Crater Bank, and Western Bank, Rogue Valley Health Services, Rogue Valley Medical Center, Oregon Health Sciences University Foundation, Oregon Advocate for the Arts, and the Oregon Economic Development Commission, all of which he served as Director or Chairman of the Board. He was, also, on the State Board of Higher Education for seven years, during which, he served a term as President. He was pleased to have been honored with awards such as the First Citizen of Medford in 1986, the Associated Oregon Industries Business Leader of the Year in 1988, and the ASV Carpenter Distinguished Citizen Award in 2000. Richard's local service also included working on the Oregon Shakespeare Festival Board as well as being a co-founder of the Medford Pear Blossom run. He is survived by his wife of 57 years, Ann; daughters Jennifer (Jim) Brands of Canby, OR, and Jayne (Doug) Hurl of McMinnville, OR; sons Jon (Marcel) Hensley of Temecula, CA, and Jeffrey (Jaci) Hensley of Phoenix, AZ; seven grandsons and one granddaughter. A Memorial service is planned for Saturday, July 9, 2011 at St. Mark's Episcopal Church, 426 West 6th St., Medford at 2:00pm. In lieu of flowers, donations may be made to Rogue Valley Medical Center (Cheney Family Place), Oregon Community Foundation, or Nature Conservancy (Oregon Chapter). Hillcrest Memorial Park & Mortuary, Medford, OR. are in care of arrangements. www.hillcrestmortuary.com.

Richard Frank Hensley, a longtime Medford resident, passed away on June 21, 2011 at his home in the Rogue Valley Manor. He was 80 years old. Richard, the only child of Frank and Queene Hensley, was born in Asheville, North Carolina on November... View Obituary & Service Information

The family of Richard Frank Hensley created this Life Tributes page to make it easy to share your memories.

Send flowers to the Hensley family.