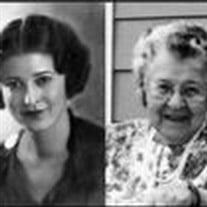 Rhoda S. Anderson Rhoda S. Anderson, 94, of Medford, died Saturday, December 15, 2007. A memorial service will be at St. Peter Lutheran Church, 1020 E. Main, Medford, Thursday, December 20, 2007 at 2:00 p.m. She will have a private family interment at Hillcrest Memorial Park. Memorial contributions may be made to Heifer International, Lutheran World Relief c/o St. Peter Lutheran Church or a charity of one's choice. The daughter of Fred and Martha Putzig, Rhoda was born May 25, 1913, on a farm near Sylvan Grove, Kans. She attended schools in Oregon, Washington, Idaho, and Kansas. Although she lived in Idaho, she started the first grade in Nyssa, Oregon, the closest school to her home. She graduated from high school in Kansas and taught in a one room schoolhouse before attending college. After graduating from Kansas State University, her adventurous spirit led her to travel by steamship and rail to Fairbanks, where she was an instructor at the only university in the Territory of Alaska. There she met O. Kenneth Anderson, a southern Oregon native who headed the U.S. Weather Bureau office. They were married in Fairbanks May 22, 1941. They also lived in Anchorage, Alaska, California, the Philippines, and Kentucky. Rhoda returned to teaching and taught in Kentucky high schools for many years. With her family she made frequent visits to Southern Oregon. From her retirement in 1970, she lived in the Rogue Valley. Her residence in the Philippines just after that country's independence sparked at interest in foreign travel. During retirement, she and her husband discovered an interest in bird identification and rekindled an enthusiasm for travel. Often viewing birds, they visited six continents on numerous trips. She was a devoted and beloved wife and mother, whose example, cheerfulness and sense of humor will be missed by her family and friends. Rhoda was an active member of the Lutheran Church, Missouri Synod, throughout her life. She was also a member of the Audubon Society, Southern Oregon Historical Society and several professional organizations. Her family wishes to thank the wonderful staff at her home at Fountain Plaza and her considerate caregivers at Avamere/Three Fountains. She was preceded in death by her husband and parents, two brothers, Harold and Elmer Putzig, and a son, Kenneth Paul Anderson. She is survived by a son and daughter-in-law, Glen and Yvonne Anderson; a grandson, Kenneth Anderson; two great-grandchildren, Trevor and Josie Anderson; and a niece, Marthanne Dedrick.

The family of Rhoda S. Anderson created this Life Tributes page to make it easy to share your memories.

Send flowers to the Anderson family.