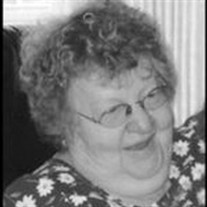 Paulette M. House Paulette M. House, born May 28, 1925, Jetmore, Kans., to Ira G. and Raissa Gazeaud Freshwater. Paulette went to school in Dodge City, Kans. She graduated from Dodge City High School in 1943. The family moved to Oregon in 1944. She worked for Bear Creek Orchards until her marriage to Donald House, Jan. 26, 1947. After the children were grown, she went to work as a custodian at the Phoenix-Talent school district and after four years she became cook manager until her retirement.Then she became a Nanny and for 16 years she cared for children when their parents were out of town. Paulette was active in the church, Kiwanis, and numerous community organizations. Paulette and Don were married for almost 62 years. They had four children, who survive, Carol Wolf (Gene), of Medford, Ore., Gayle Busby (Jeffery) of Birmingham, Ala., Jon House (Terri), of Medford, Ore., and Ron House, of Medford; five grandchildren; and five great-grandchildren. She was preceded in death by her parents; brother, Albert; and a great-grandaughter, Riley Scheidler. Donations may be made to Habitat for Humanity. Memorial service will be Tuesday, Jan. 13, 2009, at 1:00 p.m. at Westminster Presbyterian Church, Medford, Ore. There will be a private family interment at Siskiyou Memorial Park, Medford, Ore. Arrangements by Hillcrest Memorial Park and Mortuary, Medford, Ore. 541-773-6162. www.hillcrestmortuary.com

The family of Paulette May House created this Life Tributes page to make it easy to share your memories.

Send flowers to the House family.