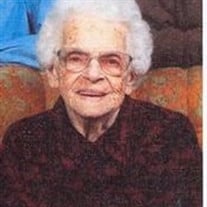 Nellie Lucille Douglas Nellie L. Douglas, 92, passed away March 30, 2011. She was born Nellie Lucille Nipper on January 19, 1919 in Jackson Hole Wyoming. She married Frank A. Douglas on October 6, 1943 and he preceded her in death in 1999 in Medford, OR. Nellie spent her early childhood years at Kelly and Jackson, WY. The family spent child hood summers camping and living out of a covered wagon while her dad operated a horse drawn road grader on the mountain roads in Teton County, WY. In 1929 the family moved to Phoenix, OR. where they purchased and operated a pear orchard in the Fern Valley area. Nellie graduated from Phoenix High School in 1934. After attending business school Nellie worked for the Southern Pacific Railroad at the Medford Station. She used to describe the good times she and her co workers had working during those tough times. After she and Frank were married, Nellie took time off to get her boys started in school. She worked as a cook at Roosevelt Elementary School cafeteria for nearly 20 years. She enjoyed the work, the children and all those who she worked with. Nellie and Frank traveled during their retirement years and especially enjoyed visiting family and friends in the Wyoming area. They also liked traveling to Arizona for the warmth and the spring baseball season. While Frank and his friends watched baseball, Nellie and friends shopped the markets. Nellie was a life-long homemaker who cherished her home, where she lived for over 60 years. Her yard and flowers were beautiful and a source of great pride. She loved all kinds of flowering plants and made sure to have something of color for every season and a place for every plant. Recent years also found her watching and enjoying the growth, blooming and success of grandchildren and great grandchildren. Nothing brought a light to her eyes like the presence of the young people. They called her GG and they all learned early where the cookies were kept and freely dispensed. Her journey through life was one of bravery and courage as she dealt with each of life's successes and challenges. She was a cancer survivor of over thirty years and witnessed the passing of all the other family members of her generation. She wasn't sure that was a blessing but thought it was better than the alternative. She always enjoyed today, planned for tomorrow with an outlook and encouragement that tomorrow will be a better day. Nellie is survived by her two sons, James A. (Shelley) and Gerald L. (Beverly). Four grandchildren: Angela Watson (Don), Rachael Fullenwider (Bill), Tyler Douglas (Katrina) and Todd Douglas. Seven great grand children: Jacob Watson, Maddalyn Fullenwider, Tanner Douglas, Audrey Watson, Brandon Fullenwider, Easton Douglas & Lila Douglas. "It's good to have an end to journey toward; but it is the journey that matters in the end. " Ursula K LeGuin, 1929. Those that came in contact with Nellie during her journey experienced her appreciation for life, independent spirit, kindness, and support. The Family would like to say a special thank you to Providence Hospice for their kind and gentle care and also those that gave her daily foster care. A private family service was held on Tuesday, April 5, 2011. Donations can be made in Nellie's name to: Providence Hospice or to the American Cancer Society. Hillcrest Memorial Park & Mortuary, Medford, OR. are in care of arrangements, 541-773-6162 www.hillcrestmortuary.com

Nellie Lucille Douglas Nellie L. Douglas, 92, passed away March 30, 2011. She was born Nellie Lucille Nipper on January 19, 1919 in Jackson Hole Wyoming. She married Frank A. Douglas on October 6, 1943 and he preceded her in death in 1999 in... View Obituary & Service Information

The family of Nellie Lucille Douglas created this Life Tributes page to make it easy to share your memories.

Send flowers to the Douglas family.