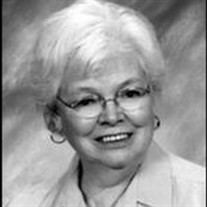 Mary Jo Johnson Mary Jo Johnson, 76, passed away on March 16th, 2007, at Emmanuel Hospital, in Portland, Ore. Mary Jo was born August 26th, 1930, in Hollywood, Calif., to parents Molly Mabel and Ashley Frank Van Order. Mary Jo graduated from North Hollywood High in 1948. She moved to June Lake, Calif., where she met and married Ronald Moore, and they had three children, Michael, Joanna, and Helen. In 1966, Mary Jo received her bachelor's degree in teaching from Chico State University, and taught for a year in Elgin, Ore., then for 10 years at Elmendorf Air Force Base, in Anchorage, Alaska. She resided in Alaska for nearly 30 years, moving to Medford in 1993. In Medford, Mary Jo worked for Bear Creek, and in her retirement years taught cake decorating locally. She was very active in her church's quilting group, making many beautiful quilts that she donated to the church. Mary Jo was preceded in death by her husband, Ron Moore, as well as her brother, Frank Van Order. Her longtime companion, Howard Blair, passed away last September. She is survived by her sisters, Ann Graham, of Ark., Cindy Rome, of Calif., as well as her brother, Peter Davis, also of Calif. She also leaves behind her children, Michael Moore, of Anchor Point, Alaska, Joanna Story, of St. Helens, Ore., and Helen Leute, of Fairchild, Wis. Mary Jo has nine grandchildren, Michael and Sonya Moore, Christina Berkhouse, Carrie, Nathan, Jessica, Stephanie and Daniel Story, and Jason Andrew. She has ten great-grandchildren as well, and many, many dear friends that she loved and cared for. A memorial service is planned for Friday, August 31, at 3:00 p.m., to be held in the chapel at Hillcrest Cemetery. A Celebration of Mary Jo's life will be held immediately following at Ascension Lutheran Church, 2617 Barnett Rd., in Medford, at 4:30 p.m.

The family of Mary Jo Johnson created this Life Tributes page to make it easy to share your memories.

Send flowers to the Johnson family.