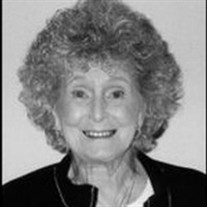 Maisie Platt The viewing and funeral service for Maisie Platt will be at 2:00 p.m. on Tuesday, May 27, 2008 at Hillcrest Memorial Chapel. Graveside service will follow at Hillcrest Memorial Park. Mrs. Platt, 85, of Medford, Ore., died peacefully on May 22, 2008 at her home, after battling with cancer. Maisie was born on March 28th with her twin brother, Trevor, in Wales, Great Britain, to Thomas and Laura Hughes (nee Phillips). On June 16, 1945 she was married to Albert R. Platt. She was a homemaker, she also was a cashier at the high school and owned a dance school in North Ridgeville, Ohio. Mrs. Platt was a member of the Republican Club, Telephone Pioneers and Eastern Star. She and Albert moved to Medford in 1983. She loved being a homemaker, decorating and working in the yard. She also enjoyed ballroom dancing with Albert. Mrs. Platt is preceded in death by her husband, Albert; mother, Laura; father, Thomas; brother, Trevor; and daughter Laura Bartosch. She is survived by her daughter, Carol Hill; sons-in-law, Bob Hill and Bill Bartosch. Other survivors included five grandchildren; 13 great-grandchildren; and twin great-great-grandchildren. Visitation will be Tuesday, May 27, 2008 at Hillcrest Chapel, 2201 N. Phoenix Rd., Medford, from 1:00 p.m. to 2:00 p.m. with the service to follow. Contributions may be made to the American Cancer Society, 31 West 6th St., Medford, OR 97501. Hillcrest Memorial Park & Mortuary is in charge of arrangements. www.hillcrestmortuary.com

The family of Maisie Platt created this Life Tributes page to make it easy to share your memories.

Send flowers to the Platt family.