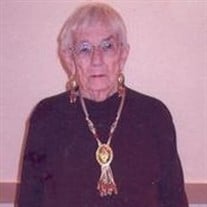 Lorraine P. Maccaux, age 96, of Prospect, Oregon passed on Saturday, July 9, 2011 at Eagle Cove Assisted Living Center in Eagle Point, Oregon. She was born on May 21, 1915 in Greenbay, Wisconsin to Joseph & Lillian (Lafave) Pinchard. Lorraine moved to Prospect, Oregon in 1964 from Lakewood, California, she then moved to Eagle Point, Oregon in 2002. Lorraine was married to Nelson Maccaux who preceded her in death in 1989. She was a member of the Medford Senior Center, enjoyed fishing, crafts, and selling the crafts that her & her daughter made. She is survived by her daughter, Marlene Renfro, and three grandchildren, John, Craig, & Curtis Renfro. Memorial contibutions can be made to the Medford Senior Center, 510 E. Main St., Medford, Oregon, or to Providence Hospice. Lorraine will be greatly missed by all who knew & loved her! Service arrangements will be announced at a later date. Hillcrest Memorial Park & Mortuary, Medford, Oregon are in care of arrangements. www.hillcrestmortuary.com

The family of Lorraine P. Maccaux created this Life Tributes page to make it easy to share your memories.

Send flowers to the Maccaux family.