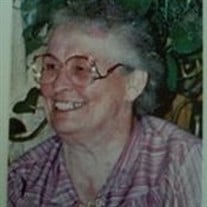 Lillie W. Carney In Loving Memory 11/24/1923 - 05/22/2012 Lillie W. Carney, of Eagle Point, died on Tuesday at Bellgrove Foster Home. She was a beloved wife, mother and granny, who filled every life she touched with love. She was preceded in death by her husband, Lindell Carney, Sr., and is survived by her two sons, Lindell "Sonny" Carney, Jr. of Eagle Point, and Denzel Carney of Plains, MT, six granddaughters, 11 great-grandchildren, and one great-great-grandchild. A celebration of life will be held on Saturday, May 26, 2012 at 11:00am, at the Eagle Point National Cemetery. Lillie was born on 11/24/1923, in Marion, VA to Lewis and Nevada Wymer. She had seven (7) brothers and sisters: Bud, Helen, Gene and Violet, who preceded her in death, and Joy, Peggy and Bob, who still live in Virginia. Lillie studied and worked as a nurse in VA until she joined the Army in 1942. She began working at the Nickles General Hospital in Louisville, KY, where she met Lindell in January 1945. Two months later, she married the love of her life on March 24, 1945. They returned to Missouri and eventually moved to Oregon in 1952. This is where their life blossomed. Lillie recently wrote her memoirs, and described a life rich in love. It was clear that she and Lindell lived life to the fullest and shared their love with everyone who were lucky enough to come into their lives. They not only cared for their own children, but foster children, as well. And when their own two sons were grown, they continued to love and care for their six granddaughters. Lillie was an amazing grandmother, but did not like to be called "grandmother" or "grandma" - she was always "Granny", and Lindell was always "Pa". Lindell and Lillie would frequently have all six granddaughters - or "brats", as they regularly called them - at their small mobile home on Salt Creek Rd. Some typical weekend activities included finding yard sale treasures, painting nails and coloring, or simply going through the car wash with all six girls in the car after a trip to McDonald's. Lillie always made sure there were plenty of toys to play with, sheets to build forts with, and sprinklers to run through. She would let the girls help cook, even when that meant pancakes ended up half in the pan and half on the stove, and if someone didn't have a nightgown to sleep in, Lillie made sure all six girls had one of Lindell's t-shirts to sleep in. The softest part of a blanket was always at the top, backs were always scratched at bedtime, and no one ever went home without knowing how much they were loved. When Lindell passed away in 2000, he and Lillie had been together for 55 years. For the past 12 years, Lillie maintained her strength and love for her family, and continued to build memorable relationships with her great - and great-great grandchildren. No one could ever deny the love her family hs for her, and they are sure she and Lindell will always be watching over them.

Lillie W. Carney In Loving Memory 11/24/1923 - 05/22/2012 Lillie W. Carney, of Eagle Point, died on Tuesday at Bellgrove Foster Home. She was a beloved wife, mother and granny, who filled every life she touched with love. She was preceded in... View Obituary & Service Information

The family of Lillie W. Carney created this Life Tributes page to make it easy to share your memories.

Send flowers to the Carney family.