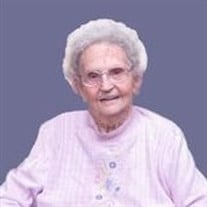 Leta Belle Martin August 27, 1915 - July 8,2012 Leta passed away on Sunday, July 8, 2012 at the age of 96. Leta Belle Gammon was born on August 27, 1915 in Republic, Missouri to Leonard Gammon and Celestia Mae "Lessie" Neill Gammon. She held her first job setting type for a local newspaper at the age of 9. On March 5, 1934 she married Paul H. Martin and had five 5 children before moving to the Rogue Valley in 1954. During her early years, Leta raised miniature poodles in her privately owned kennel. She later owned & operated North's Motel in Medford for several years. Leta then enjoyed working in the office as title clerk for her son at Ron Martin Auto Wholesale greeting customers into her eighth decade. She was well known for her pleasant smile and independent attitude. During her spare time, Leta enjoyed sewing and craftwork. She made hand-made dolls, pillows and quilts that she would sell at local flea markets. Leta spent her later years reading and spending time with her children and their families. She enjoyed telling stories about her grandpa's intuition and his silly old goose. Her face would light up when she spoke of her mischievous boldness with the long-horned bull when she was only 3 years old. She resided at Three Fountains Rehabilitation Center in Medford where she will be remembered by her wonderful smile and determined will as well as for her unique and sometimes irreverent sense of humor. The family appreciates the care provided during her time there and is grateful for those who took the time to get to know her. Leta is survived by her sister Maxine Smith of Lacygne, Kansas; sons Robert J. Martin (Theresa) of Rogue River, OR., James P. Martin (Cathy) of Dubuque, Iowa, Ronald R. Martin (Jonni) of Grants Pass, OR., and daughter Judy Case of Otis, OR., daughter-in-law Marvel Martin of White City, OR., along with eighteen grandchildren, thirty-nine great grandchildren, and sixteen great-great-grandchildren. She was preceded in death by husband Paul and eldest son William. Leta demonstrated amazing strength, love and kindness during her lifetime and she will be greatly missed by all. Funeral services will be held at 2:00PM Saturday, July 14, 2012 at the Hillcrest Memorial Chapel, 2201 N. Phoenix Rd., Medford, OR. She will be laid to rest next to her husband Paul, who passed away in 1987. Contributions are suggested to your favorite charity. Hillcrest Memorial Park & Mortuary in care of arrangements.

The family of Leta Belle Martin created this Life Tributes page to make it easy to share your memories.

Send flowers to the Martin family.