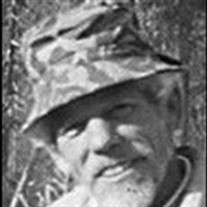 Larry Vee Simmonds July 7, 1946-Dec. 17, 2008 Westwood resident Larry Vee Simmonds passed from this life peacefully, with his loving wife at his side, at his residence Wednesday evening, Dec. 17, 2008, following a short and valiant battle with cancer. Born sixty-two years ago in San Diego, Calif., To Vester "Bud" and Mary (Vessey) Simmonds, on July 7, 1964. The family relocated to Medford, Ore., shortly after his birth. Larry was raised in Medford where he attended school graduating as a member of the Medford High School's "Class of 1964". Shortly following his high school graduation, Larry joined the U.S. Marine Corps where he served his country honorably during the Vietnam War. Larry was instrumental in developing Bio-Mass Projects in both Oregon and California and recieved a patent for his innovative ideas. Larry was never one to sit idle. He also held another patent and was always looking for better ways to accomplish the task at hand. He enjoyed freedom of flight as a private pilot, raced stock cars, while residing in Oregon, and loved spending time in the outdoors, be it fishing, hunting, water skiing, or motorcycle and quad riding. He had a deep appreciation and respect for environment. He was a longtime member of the American Legion Post of Eagle Lake, Calif. On July 23, 1984, in Carson City, Nev., he married his best friend and love of his life, Sharon, whom he med while overseeing a local Bio-Mass project in Westwood. In passing Larry leaves his wife, Sharon, of Westwood, Calif.; parents, Vester "Bud" and Mary Simmonds, of Medford, Ore.; sister, Teresa Bratton, of Medford, Ore.; niece and nephew, Christine and Andy Bratton, of Medford; stepchildren, Belinda Du-Von, and Jere Bolin; and five grandchildren. Larry joins in his eternal home, his daughter Melissa Michelle Simmonds who passed from this life in 1966 at the precious age of three months old. Memorial Service will be held, July 25, 2009, 2 p.m. , at Hillcrest Memorial Park Chapel, Medford, OR. Reception to follow at the Medford Masonic Lodge #103, 975 N. Phoenix Rd., Medford. Arrangements by Hillcres Memorial Park and Mortuary 541-773-6162 www.hillcrestmortuary.com

The family of Larry Vee Simmonds created this Life Tributes page to make it easy to share your memories.

Send flowers to the Simmonds family.