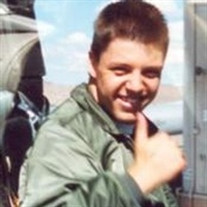 Jonathan Kanne, age 30, of Medford, Oregon passed away Wednesday, April 4, 2012 at Oregon Health and Science University, Portland, Oregon. He was born May 23, 1981 in Hemskerek, Netherlands, to Theodurous J. Kanne and Beatriz Eugenia Kanne. He moved to the Rogue Valley in 1991. Jonathan worked as a fire figher, emergency medical technician and a volunteer police officer. He attended Rogue Community College in Medford, Oregon. He enjoyed flying, shooting and was a hunter safety instructor. He was a honorary member of the Wind and Fire Motorcycle Club, State of Jefferson chapter. Survivors include his mother Beatriz Kanne, of Medford, Ore.; wife in the eyes of God, Hally Hudson of Medford, Ore.; sister, Gina of Merlin, Ore.; and brother Ted of Valdasta, Georgia. He was preceded in death by his father. A viewing was held .on Friday, April 13, 2012 at 10:00 a.m., with a chapel service to follow at 1:00 p.m., at the Hillcrest Memorial Park Chapel, 2201 N. Phoenix Rd., Medford, OR 97504. Ordained Ron Rocker will officiate. Arrangements are by Hillcrest Memorial Park and Mortuary, Medford, Ore. www.hillcrestmortuary.com.

The family of Jonathan Kanne created this Life Tributes page to make it easy to share your memories.

Send flowers to the Kanne family.