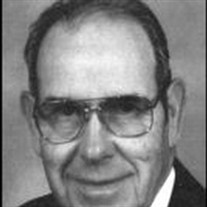 John William Glover John William Glover was born on July 8, 1923, in Enid, Mont., to parents, Edward Gersham Glover and Mabel Lois Tucker. The family moved to Phoenix, Ore. when he was one-and-a-half years old. John grew up in Phoenix where he made many lifelong friends in the area. He joined the Navy during WWII and during that time married Juanita Grace Maxson, his wife of 44 years. After the war, John and Anita settled in Medford, Ore., where they raised a daughter together. John loved being outdoors fishing, hunting and golfing. He was a lifelong member of the Elks Club in Medford. Most of his work was spent in the lumber industry until he retired. After retirement, he found love again when a friend introduced him to Emogene Frey. He and Emogene have lived in Ashland for the past 20 years. He and Emogene shared many wonderful adventures together traveling, both here and abroad. John had a full life. His spirit was ready for more but his body was broken. Now his spirit is free and his body out of pain. John was preceded in death by his wife, Juanita Grace Glover; his parents, Mabel and Edward Glover; brothers, Donald and Edward Glover; sisters, Helen Martin, Mabel Adkins, Ella Adkins, Geraldine Maxson, Grace Parsons and Peggy Wolfe. Surviving is his daughter, Shirley Buck and husband, Terry Buck; loving companion, Emogene Frey; and sisters, Fran Semple and Barbara Hall. In addition are many nieces and nephews. A memorial service will be held on Saturday, Dec. 5, at 2 p.m. in the Hillcrest Memorial Park chapel. In lieu of flowers, please make memorial contributions to the American Heart Association. Arrangements by Hillcrest Memorial Park and Mortuary, Medford, Ore. 773-6162 www.hillcrestmortuary.com

The family of John Glover created this Life Tributes page to make it easy to share your memories.

Send flowers to the Glover family.