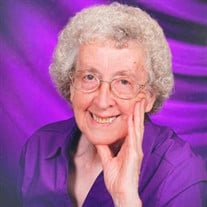 Mama Jean Jean Viola (Hoefs) Gren was born March 31, 1933 in Dorset, Minnesota to Otto August Ferdinand and Pauline Marie Hoefs. She was the last of seven children born to the couple. She had three siblings who grew up: Edward, Max, and... View Obituary & Service Information

The family of Jean Viola (Hoefs) Gren created this Life Tributes page to make it easy to share your memories.

Send flowers to the Gren family.