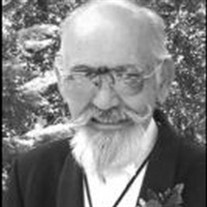 James Orson Williams James Orson Williams, 74, of Shady Cove, Ore., passed away August 13, 2008 in Medford, Ore. James was born in Lost Creek, West Virginia, on September 2, 1933 to Charles and Susie Williams. James graduated from Salem College in West Virginia at only 20 years old with a bachelor's degree, later obtaining his master's degree, and went on to teach Industrial Arts (shop) classes in NY. and taught in Bridgeton Junior High and Senior High in N.J. from 1960 until his retirement in 1993. He was an honorary member of the Nanticoke Lenni-Lenape Indians of South Jersey where he was known as Running Beaver. He spent 10 years teaching school for the Indian students after his retirement. He married Donna Jean Gray on August, 23, 1954. They later divorced and James married Shirley Mae Johnson on Feb. 13, 1971, in Bridgeton, N.J. He moved from Shiloh, N.J. to Southern Oregon in 2005 when his wife passed in April, 2004. James was also a volunteer for many years with Shiloh Fire & Rescue and was Superintendant of the Cumberland County Fire Police Association, and assisted with the 9-11 disaster. He and his wife, Shirley, were hosts to a French exchange student in 1975. He had many hobbies, including, gardening, fishing, leatherwork and camping, all of which he loved to do. James was preceded in death by his brothers, "Roxy" Dane Williams, Morris "Kendall" Wilson, Ransell "Lee" Williams, "Charles" Mather Williams, and Leonard McClain Williams. He is survived by his son, Bradley James Williams, of Olivehurst, Calif.; daughters, Caroline Jean Robinson, of Shady Cove, Ore., Stephani Jo Cummings, of Sacramento, Calif., Pollyanna Williams, of Guatemala, and Judith Ann Thompson, of Pittsburgh, Penn.; sister Lenora Virginia Russell, of Williamstown, West Virginia; brothers T. Dane Williams, of Lost Creek, W.V., and John F. Williams, of North Loup, Neb; 11 grandchildren; and seven great-grandchildren. There will be a memorial service held at the Seventh Day Baptist Church, Friday, Sept. 5, 2008, at 10 a.m. with Rev. Perry Cain officiating. (Exit 110 on S. I-79 at Mt. Clare Rd.) "The Brick Church" Lost Creek W.V. (304) 745-4481. There will be a graveside service and commitment held at Fernwood Memorial Cemetery, at 1 p.m. on Monday Sept. 8, 2008. 794 Shiloh Pike, Bridgeton, NJ. (856) 451-3636. Hillcrest Memorial Park and Mortuary are handling the arrangements. (541) 773-6162. www.hillcrestmortuary.com

The family of James Orson Williams created this Life Tributes page to make it easy to share your memories.

Send flowers to the Williams family.