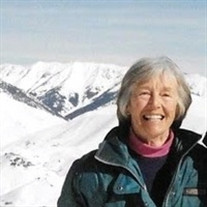 Genevieve Schroeder (Gevie) Page lived a long and full life. She was born in Seattle, Washington on December 22, 1916 to Violet Megrath and Frederick Hilton Schroeder, the eldest of four children. Genevieve attended Ravenna School, and graduated from Roosevelt High School in 1934 where she found lifelong friends, then moved on to the University of Washington, where she joined Gamma Phi Beta Sorority. Soon she married her lifelong mate Walter Howard Page. They shocked everyone by eloping on September 11, 1938 while still undergraduates and remained a loving couple, devotedto each other through 75 years of marriage. Walter and Genevieve moved to Salt Lake City where Stephen Haven Page was born on August 9, 1941. Back in Seattle, they moved to 42 nd street in Laurelhurst; Leslie was born on April 1, 1944. The family moved to Clyde Hill in Bellevue in 1949-1983, to a house built by John Hill at 2009-94th NE. That's where Steve and Leslie grew up, before they married and left home. Genevieve had a broader interest than housekeeping. She joined the labor force in about 1957 and, inspired by skiing in Europe, became a travel agent for General Travel in Bellevue, which took her to over 30 countries in Asia, Africa, and Europe. At the same time, she and Walter developed their tennis games and skied in the Cascades and in Sun Valley. In about 1976, Walter and Gevie bought a cabin on Lopez Island's Fisherman's Bay Peninsula that they decided to keep in the family. This has been, and will be, the site of many gatherings of friends and family. Then came the big move to Sun Valley, where they lived from 1989-2005, settling in Elkhorn, skiing, and providing hospitality to their children, grandchildren, ancient skiers, and other friends. This was a wonderful time. The Rogue Valley Manor was another good choice of residence in two cottages and two apartments before the Special Care Center and Health Center, Genevieve and Walter had final years among old and new friends and loving caregivers. All of her life, Genevieve was a deeply spiritual person who drew on her early childhood religious instruction and relective character. She bore tragedies with great courage and dignity, notably the early deaths of her parents and the death of her son Stephen in 2001. Still waters run deep. Genevieve's greatest attachments were to Walter, whom she joined 10 weeks after his death, and to her family. And then came nature: mountains, and the peace of Lopez Island. For this reason, the poem below was read at her service at the Rogue Valley Manor on October 7, 2014. Genevieve Schroeder Page leaves us bereft of a wonderful woman, whom we recognize by her love, her compassion, and her beauty. She passed away on September 29, 2014 and is survived by her daughter Leslie Page Moch: her grandchildren Christopher Haven Page of Bellevue ID, Alexandra Page Henning of Bellevue WA, and Sarah Berwald of St. Paul, MN; great-grandchildren Nicholas Haven Henning, Cathleen Markee Henning, and Niels Berwald.

The family of Genevieve Page created this Life Tributes page to make it easy to share your memories.

Send flowers to the Page family.