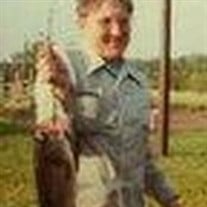 Gene 72, went to be with the Lord July 9, 2011 in Central Point Oregon after 24 years of kidney dialysis. Gene was born Willard Eugene Knight to Willard and Wilma Knight in Centerville, Kansas January 6, 1939. He was a member of the Christian Church in Coquille Oregon. He attended schools in Myrtle Point Oregon. The family moved to Coquille and then moved to Medford in 1987 so he could be on dialysis. He loved to fish, do jigsaw puzzles, and play cards. He loved country music. He was an avid sports fan. He followed the Oregon Ducks games and all Kansas teams, especially baseball and basketball. When he was able he grew watermelons and sunflowers. He had several bird books he used to identify all the birds he fed. He was proud of his new digital camera and his many albums filled with photos of birds and flowers. Gene loved Alaska but was only able to visit once, so Alaska will be his final resting place. Gene is survived by brothers, Ken of Moses Lake, WA; Chuck (Dalette) of Coos Bay, OR; Larry (Terri) of Bandon, OR; Jon (Jennifer) of Wasilla, AK; sisters, Joann Densmore (Patrick) of Medford, OR; and Debbie Zuspann (Dan) of Wasilla, AK. Gene was uncle to over 50 nieces and nephews. The family would like to give special thanks to the dialysis clinic staff, nurses, and Dr. Douglas Hecox along with his caregiver Judith Emmons who all cared for Gene with such compassion. Family and close friends will have a Remembrance Gathering to celebrate "Gene Bob's" life. Time and date to be announced later. Please consider a donation in his memory to the Rogue Valley Dialysis Patient Trust Fund, 760 Golf View Drive, Medford OR, 97501. Hillcrest Memorial Park & Mortuary, Medford, Oregon are in care of arrangements. www.hillcrestmortuary.com

Gene 72, went to be with the Lord July 9, 2011 in Central Point Oregon after 24 years of kidney dialysis. Gene was born Willard Eugene Knight to Willard and Wilma Knight in Centerville, Kansas January 6, 1939. He was a member of the Christian... View Obituary & Service Information

The family of Gene Knight created this Life Tributes page to make it easy to share your memories.

Send flowers to the Knight family.