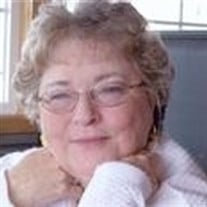 FLORINE GRAVES Florine Graves, 74, of Talent, passed into eternal life December 2, 2010, after a long illness. Florine was born May 21, 1936, in Gallup, New Mexico, to William and Lucille Wolcott. When she was six, the family relocated to Salinas, California where she attended local schools and graduated from Salinas High School. She was an accomplished artist and studied under John Robbie. She married Allen Graves May 25, 1975 and together they raised five children. Her career was that of a bookkeeper. After Allen's retirement, they relocated to Southern Oregon living first in Grants Pass, and for the last five years in Talent. Florine loved to paint and had a penchant for landscapes and old barns. She collected ceramic figurines, especially angels; and had owls of all sorts. She enjoyed traveling, and reading was also a favorite pastime. She was predeceased in death by Max Wilkes, her former husband, with whom she had three children; Mark, Cheryle, and Linda. Survivors include her son, Mark Wilkes of Bandon, OR; daughter Cheryle Swinscoe (Chris) of Monterey, CA; daughter Linda Wilkes of Grants Pass, OR; Lori (John) Miller of Fresno, CA; Glenn (Heather) Graves of Turlock, CA;twelve grandchildren; and, nine great-grandchildren. Also surviving is her sister, Doris (Douglas) Rowe, of San Jose, CA; and four nephews. A memorial service is planned for 3:00 p.m. Friday, December 10, 2010, at Grace Lutheran Church, 660 Francis Lane, Ashland; Pastor Timothy Cartwright officiating. Service will be followed by a special luncheon prepared by the Women of Grace. Donations may be made in Mrs. Graves' name to Grace Lutheran Church, Ashland. A private graves ide ceremony and interment will be at Hillcrest Memorial Park. The family would like to offer special thanks to the nursing staff at Rogue Valley Medical Center who lovingly cared for her until her passing. Hillcrest Memorial Park & Mortuary, Medford, OR. are in care of arrangements, 541-773-6162 www.hillcrestmortuary.com

FLORINE GRAVES Florine Graves, 74, of Talent, passed into eternal life December 2, 2010, after a long illness. Florine was born May 21, 1936, in Gallup, New Mexico, to William and Lucille Wolcott. When she was six, the family relocated to... View Obituary & Service Information

The family of Florine Graves created this Life Tributes page to make it easy to share your memories.

Send flowers to the Graves family.