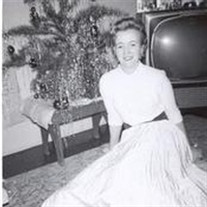 Evelyn Lucille Pierce January 9, 1924-February 21, 2011 What can you say about the woman who taught you to fly? Evelyn Lucille Pierce was born a twin January 9, 1924 to Glenn and Ethel Dickey in Pomona, California. Her beautiful, huge heart finally wore out at Orchards Assisted Living in Medford, Oregon. A child of the Great Depression, she was raised in Toledo, Oregon with her three brothers and eventually moved briefly to Illinois where she and her first husband lived, and had her first son, Michael. After her husband's death, she returned to Portland, Oregon, where she met and married Oscar "Gus" Gustafson for 25 years. They had two children, Jeff and Kathleen. Evelyn worked in several capacities as executive secretary while she excelled at and loved sewing, crafts, dancing, gardening, crab feasts with her family at the beach, and travel with her beloved family. She moved to Medford in 1974, worked for the 3M company, and married James Pierce, who predeceased her. Mom was brave, smart, classy, beautiful, fun, loved a good time, and never complained. She set an example for her children and grandchildren. She was a faithful member of Phoenix First Presbyterian Church. She leaves behind two proud children, Jeffrey (Jennifer) Gustafson of Shady Cove, Oregon and Kathleen (Roy) Buffington of Ashland ,Oregon. She also leaves five grandchildren; Mika Buffington, Kami (Andrew) Persse, Tabitha (Grant) Schneider, Michael (Breezy) Gustafson, and Danny (Summer) Gustafson. She had recently welcomed four great-grandchildren, Mia, Jullein, Sydney, and Lillian. She was pre-deceased by her parents, brothers Richard, Albert and Frank, husband Jim, and her beloved son Michael. In lieu of flowers, hold each other close, celebrate life, and lift a glass in honor of this special woman. Many thanks to her dear friends and the good care of Orchards and from the angels at Providence Hospice. Thank you for the gift of our mother - we will love you forever. A Memorial service will be held on Saturday, February 26, 2011, 10:30 AM, at Hillcrest Memorial Park Chapel, 2201 North Phoenix Road, Medford, Oregon. Memorial Contibutions can be sent to Providence Hospice for the amazing gift of dignified life they give, and at Phoenix First Presbyterian Church Community Supper. Hillcrest Memorial Park & Mortuary, Medford, OR. are in care of arrangements, 541-773-6162 www.hillcrestmortuary.com

The family of Evelyn Lucille Pierce created this Life Tributes page to make it easy to share your memories.

Send flowers to the Pierce family.