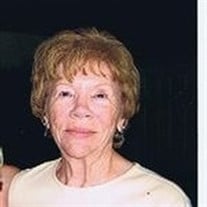 Doshia Marie Pearson, 81, died December 9, 2010. She was born Doshia Marie Rashe on September 22, 1929 at Eila, Alabama to Orvalee and Doshie Rashe. On April 17, 1954 at Jackson, Mississippi she married Frederick M. Pearson. Marie graduated from Shubuta High School in Shubuta, Mississippi in 1947. She attended Draughons College for one year. The family moved to the Rogue Valley in 1955 where she attended Southern Oregon College. She retired from the Department of Human Resources, State of Oregon in 1995. After retirement she was an active volunteer where she was involved in the SMART Program at Phoenix Elementary School and was a tax preparer for the AARP program. She was also an active member of Beta Sigma Phi Society. She enjoyed traveling and spending time with her children. Marie is survived by her husband, Fred; sons, Ronald M. (Mari) Pearson and Dr. Gregory L. (Marybeth) Pearson of Medford, Oregon and daughter, Lynda (Richard) Cruzen of Benecia, California; seven grandsons, Fred, David, and Tyler Pearson, Eric Breitenfeld, Drew, Dane, and Sean Pearson; two brothers, Thomas (Ruby) Rashe and Gene (Fay) Rashe, Medford, Oregon; three sisters, Brinn (Carl) Orndoff, Central Point, Oregon, Doris (Ken) Bryant of Linden, Alabama and Ermalee Reeder of Meridian, Mississippi as well as numerous cousins, nieces and nephews. She was preceded in death by her parents and one sister, Elise Jackson of Alameda, California. A memorial service will be held at West Main Church of Christ, 1701 W. Main Street on Saturday, December 18, 2010 at 11:00am. In lieu of flowers, donation may be may in remembrance of Marie to Access of Medford, Inc., P.O. Box 4666, Medford, Oregon 97504 Hillcrest Memorial Park & Mortuary, Medford, OR. are in care of arrangements, 541-773-6162 www.hillcrestmortuary.com --

The family of Doshia Marie Pearson created this Life Tributes page to make it easy to share your memories.

Send flowers to the Pearson family.