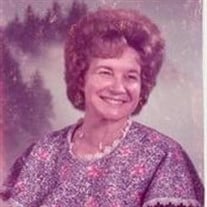 Doris Marie Sheeler, age 88, of Medford, Oregon passed away Monday, August 27, 2012, at her home. Memorial services will be held at 4:00PM, Saturday, September 8, 2012 at the Calvary Temple, 5th & Pine Street, Central Point, Oregon. Pastor Gene Simmons of Church of All Nations officiating. Doris was born April 16, 1924, in Greenville, N.C., to Seth Lee and Willie Pearl Everett. On April 29, 1961 she married Albert Charles Sheeler who survives. Their blessed marriage of 51 years and her faith in God remained strong to the end. She moved to the Rogue Valley in 1967. Her hobbies were sewing, gardening and volunteering at the Calvary Temple Food Bank. She belonged to a quilty club. In addition to her husband Doris is survived by three sons Dallas Cox of Sulpher Springs, Texas, Albert C. Sheeler Jr. and Lloyd Sheeler both of Medford, Oregon, daughter Gwen Constant of Santa Maria, CA.; 22 grandchildren; 29 great-grandchildren and four great great grandchildren. Doris was preceded in death by daughters Janice McCrystal and Barbara Mariscal; two grandsons; two sisters and four brothers. She will be greatly missed by all who knew and loved her. Memorial contributions may be made to Asante Hospice. Arrangement by Hillcrest Memorial Park & Mortuary, Medford, Ore., 541-773-6162. www.hillcrestmortuary.com

The family of Doris Marie Sheeler created this Life Tributes page to make it easy to share your memories.

Send flowers to the Sheeler family.