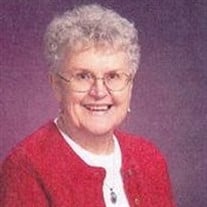 Doris E. Jewett died Friday, April 8, 2011 in Salem, Oregon. Doris was born on the Doughton family farm in Linn County, Oregon to Millard B. Doughton, and Sybil McClure Doughton on December 9, 1922. Doris grew up in Salem, attended Salem public schools, and graduated from Salem High School in 1941. Doris attended Willamette University for two years then left to work for the Selective Service. While growing up in Salem, Doris was an active member of Jason Lee Methodist Church, and was active in many youth activities. On November 18, 1945 Doris married the love of her life, Richard D. "Dick" Jewett and moved to Medford, Oregon. Dick and Doris experienced a long and happy marriage which lasted over 63 years. In June, 2008 Dick and Doris returned to Salem to be closer to family. Doris' primary mission during her long and successful life was her husband and children, but she was also employed outside the home, first working for the Medford Public School Library System, and later as a Deputy Clerk in the Jackson County Clerk's Office. Doris was an active member of First United Methodist Church in Medford and the United Methodist Women. She was also involved with P.E.O., Stevens Ministry, Marriage Encounter, Walk to Emmaus and many other activities. After retirement in 1984, Doris enjoyed traveling, hiking, visiting grandchildren, and family re-unions. Dick and Doris's marriage produced three children: James R. Jewett (Pat) of West Richland, Wash.; Thomas D. Jewett of Salem; and Anne J. Venner (John) of Woodburn, Ore., all of whom survive. Other survivors include grandsons Timothy J. Jewett (Mary) of Seattle, Wash., and Matthew R. Beeble of Portland, Ore., granddaughter Cybil A. Beeble of Portland, Ore. , great grandchildren Matthew Jewett and Samantha Jewett of Seattle, Wash., sister Coralie Rhoten (David) of Salem, brother Kenneth Doughton (Pat) of Salem, sister-in-law Mary Doughton of Salem, and many nieces and nephews. Doris was preceded in death by her husband Dick and her brothers Millard M. Doughton and David B. Doughton. Doris' enthusiasm and gusto for life will be sorely missed by all who knew and loved her. The public is invited to a graveside service scheduled for Saturday June 25 at 10:00 AM at Hillcrest Cemetery and a reception following. Memorial donations should be made to United Methodist Committee on Relief (UMCOR) or to the Alzheimer's Association. Hillcrest Memorial Park & Mortuary, Medford, OR. are in care of arrangements. www.hillcrestmortuary.com

The family of Doris E. Jewett created this Life Tributes page to make it easy to share your memories.

Send flowers to the Jewett family.