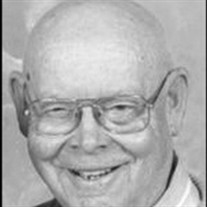 Dixon "Dick" Earl Kenner Beloved son, brother, husband, father, uncle, grandfather, great grandfather and friend, Mr. Kenner, 92, of Medford, Ore., died peacefully in a local residential care facility on the morning of August 6, 2007. He was born February 10, 1915, in Galena, Mo., to Walter Leslie and Cara Vetura Kenner. In 1919, at the age of four, Dick along with his older brother Harold, and his parents moved to Table Rock, Nebr., to farm. There, he attended Kindergarten through 12th grade, in one schoolhouse building. He graduated in a class of 23 students in 1932. After graduating he married Zelma "Billie" Philips. They lived and farmed in Table Rock until 1940. At that time they and their two children headed west to the state of Washington. Dick held a number of jobs through the years, but the one he enjoyed the most was selling cookware through preparing and serving dinners in customers homes. He loved to cook, enjoyed people, and was a successful salesman for many years, becoming a nationally recognized regional representative for the product. In 1968, after 36 years of marriage, Dick's first wife, Zelma, passed away. In October of 1969, he married Golden Chambers. They went on to have over 38 happy years together. Mr. Kenner loved to hunt, fish, RV, and was happiest while relaxing in the great outdoors with his family and friends. After he retired, Dick and his wife Golden happily traveled for 20 winters. At one time, he served as the Wagon Master of the Medford Caravaners Trailer Club. He was also a member of the Medford Gun Club for many years. Additionally, Mr. Kenner was a member of Medford Lodge 103 AF&AM. There he also served as a Grand Committee member for the Blood Bank Commission. He is a Past Patron of Reames Chapter 66 Order of the Easter Star, in Medford, and Past Associate Guardian for Job's Daughter's Bethel 55, also of Medford. He is survived by his wife of 38 years, Golden Kenner; step-daughter, Jennifer Benson; daughter-in-law, Misuko Kenner; seven grandchildren; and 11 great grandchildren. He was preceded in death by his parents, Walter and Cara; his brother, Harold; his first wife, Zelma; and two of his beloved children, Shirley McNealy and Richard Kenner. Dick was a fun-loving person who enjoyed sharing laughter with others. He will be remembered for the many stories he told recounting the adventures and experiences of his long life. Mr. Kenner will be greatly missed but warmly remembered by all those who knew and loved him. The family wishes to thank the respectful and caring staff of Mr. Kenner's health care provider, the loving and attentive folks at his care facility, and the devoted souls of Asante Hospice. A memorial service will be held at 1:00 p.m., on Saturday, August 25th, at the Hillcrest Memorial Chapel. In lieu of flowers, please make donations to Asante Hospice, at 2960 Doctors Park Drive, Medford, Ore., 97504. Arrangements by Hillcrest Memorial Park & Mortuary, Medford, Ore. 541-773-6162.

The family of Dixon Earl "Dick" Kenner created this Life Tributes page to make it easy to share your memories.