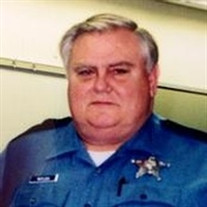 Chris D. Matlock Chris David Matlock, age 59, of Roseburg, OR. passed Sunday, July 22, 2012 at Rogue Valley Medical Center. He was born Dec. 2, 1952 in Colville, WA. to Russell Lee and Elizabeth Ann(Connley) Matlock. In 2007 he married his longtime companion Linda Lee Burns who survives. Chris was an Oregon State Trooper for 29 years retiring in 2003. His OSP career included being Range Master, was on the Entry Team for home searches, was a marksman for the Governors protection team and was instrumental in establishing the local commercial vehicle inspection program. He was known as Pooh Bear by the other troopers for not only his size but also his kind demeanor. Chris enjoyed fishing, hunting, shooting, gun collecting, his ranch, landscape design and sharing his garden with his grandchildren. He enjoyed raising horses and learned about them from Linda. He was especially proud of the barn he built to fulfill Linda's lifelong dream of having a big barn for her and the horses. Survivors in addition to Linda include his father Russell Matlock of Roseburg, OR., children; Joseph "Joey" R. Matlock, Sharee D. Burns and Amber Lee Lologo of Medford, OR., a sister Carla McClure of Roseburg, OR., a brother Steve Matlock of Salem, OR., grandchildren; Haylei, Michael, Soncere, Stephen, Gabriella, Brieanna, Jordawn, Marcus and Alexander. Chris was preceded in death by his mother Betty Matlock and a daughter Angela K. Burns. Memorial services will be 2:00PM Saturday, August 11, 2012 at the New Life Christian Center, 1728 NE Vine St., Roseburg, OR., with a reception to follow. Visitation in Medford was Friday, July 27, 2012 at the Hillcrest Memorial Chapel, 2201 N. Phoenix Rd., Medford, OR. In lieu of flowers donations are suggested to the Oregon State Police Foundation, PO Box 2074, Salem, OR 97308. Hillcrest Memorial Park & Mortuary in care of arrangements. www.hillcrestmortuary.com

The family of Chris David Matlock created this Life Tributes page to make it easy to share your memories.

Send flowers to the Matlock family.