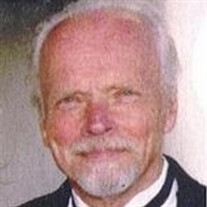 Charles Joseph Wiesenfarth, age 77, of Eagle Point, Oregon, died at his home on Sunday, January 31, 2010. Charles, was born May 16, 1932 to Charles Adam and Elizabeth Koechler Wiesenfarth in the East New York section of Brooklyn, New York. He attended St. Michael's elementary school and St. Augustine Diocesan High School run by the De La Salle Christian Brothers, who, he stated, attempted to adjust his attitude on a few occasions. He enlisted in the United States Air Force in January 1951and was honorably discharged four years later. He decided to pursue a career as an aeronautical engineer and enrolled in and graduated from the Academy of Aeronautics (now the College of Aeronautics) in Flushing, New York. Upon graduation, Charles began his career as a mass properties engineer, aerodynamicist, and structural test engineer at Kaman Aircraft Corporation in Bloomfield, Connecticut. Subsequent employment was in rotor design and management for Hughes Tool Company, Aircraft Division, in Culver City, California; Boeing Helicopters in Ridley Park, Pennsylvania; L. O. M. Corporation of Traverse City, Michigan; Rogerson Hill Corporation in Port Angeles, Washington; and Boeing Helicopters in Mesa, Arizona. His last position was Director of Engineering, Erickson Air Crane, Central Point, Oregon. All his employment was directed to the superior design and performance of helicopters. Charlie was an avid sportsman. Everywhere he lived he sought out opportunities to hunt and fish. Though born in the eastern United States, he found himself attracted to the West where he became a marksman as a hunter and avid fly-rod fisherman, though the salmon of Lake Michigan also engaged his considerable abilities. Moreover, from his teenage years until his death, he fashioned himself into a cabinet-maker of remark. During his ten-year retirement, he equipped his home with a first-class workshop where he indulged his life-long love of woodcraft. He spent many hours turning out beautiful pieces of furniture, including a custom-designed sewing cabinet for his wife Faye. It was not unusual for his friends to receive a package in the mail that contained a piece of his woodcraft that Charlie sent because he thought they would enjoy the gift. One lucky friend was the recipient of an armoire crafted from beautiful woods, as thanks for hosting him and his wife during a vacation. His artistic skills were evident not only in his woodcraft but also in his splendid helicopter rotor designs and his superb penmanship. Charlie followed politics with relish and did not hesitate to express his opinions publicly. His letters to the editor were frequently published in op-ed pages of local papers. Friends and family most appreciated his wry sense of humor. The genius of his wit and love of a precise word were well-known to all he met. He could always be counted on to deliver a satirical quip or a joke in a business meeting or in a gathering of friends. But if Charlie had a singular trait, it was his ability to form long-lasting friendships. Today, the many friends he acquired as he moved from company to company and state to state mourn his passing. Charlie is survived by his wife of 28 years, Fayrene; by his son Joseph; his daughter Mary and her husband, Martin Simone; by his son John and his wife Kathy; by his daughter Julie and his son Charles Scott and his wife Patricia; by his grandchildren: Eric and Reena Cramer; Matthew, Michael, Andrew, and Ryan Wiesenfarth; Joshua, John, Jennifer, and Jude Scott; as well as by his brother, Joseph Wiesenfarth and his wife Louise Halpin Wiesenfarth and their son Adam. In lieu of flowers please make donations to the American Cancer Society or Hospice. Hillcrest Memorial Park & Mortuary in care of arrangements.

The family of Charles J. Wiesenfarth created this Life Tributes page to make it easy to share your memories.

Send flowers to the Wiesenfarth family.