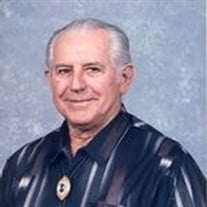 Cecil Lee James, 92, of Medford, OR. passed Monday, June 28, 2010. Cecil was born Sept. 24, 1917 in Burden, KS. to E. R. & Mary Ann(Quier)James. In 1936 he married Mildred Diane Sumner. He & Mildred lived in various places in southern Oregon including Brookings, Sprague River, Klamath Falls, Jacksonville and Medford. He owned & operated a Richfield Truck Stop in Medford. He also had a construction business in Medford. In his younger days Cecil enjoyed racing at the Medford Posse Grounds, dancing, he had owned various airplanes and enjoyed flying. He was a past Lions Club member. Cecil is survived by a daughter Juanita Gillaspey of Medford, OR., a son Markey James of Jacksonville, OR., 5 grandchildren and 12 great grandchildren. He was preceded by his wife, parents, 2 sisters, 1 brother, a daughter Cecelia Kay James, 2 grandsons, 1 great grandson, 1 great great grand daughter. Funeral services are planned for 10:00AM Friday, July 2, 2010 at Hillcrest Memorial Park Chapel, Medford, OR., with a reception to follow. Cecil will be interred next to Mildred at Hillcrest Memorial Park. Memorial contributions are suggested to the Medford Senior Center. Arrangements by: Hillcrest Memorial Park & Mortuary, Medford, OR. 541-773-6162 www.hillcrestmortuary.com

The family of Cecil L. James created this Life Tributes page to make it easy to share your memories.

Send flowers to the James family.