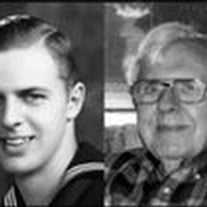 Ben Dirksen Ben Dirksen, 86, of Medford, Ore., went to be with the Lord on July 29, 2007, in his sleep, at their home. Ben was born to Garrit Jan Dirksen and Hendricka Marie Houbolt on February 27, 1921, in Brooten, Minn. He grew up in Roselin, Ill., with his brother, Henry Dirksen and two sisters, Betty Jane Vanderbilt and Georgia DeVries. He graduated from Roselin High School then joined the United States Navy as an aviation mechanic. When he met Linda Solch they dated for three months then married on December 30, 1940, in Cisero, Ill. Ben and Linda moved to southern California in 1941 where they raised their four children. Ben was part owner of the insurance firm Lyman, Dirksen and Francisco. In 1969 he sold everything and moved his wife and their two younger daughters to Medford, Ore. Here he was involved in real estate and worked at Equitable Savings as a loan officer. He enjoyed fishing on the Rogue, bowling, golf, gardening, coin collecting, doing puzzles and playing with his grand and great-grandchildren. The most important decision he made was when he and his wife accepted Jesus Christ into their lives in 1970. Ben loved the Lord and lived his life for him daily. That in itself was the most precious gift he gave to his family and generations to come. Ben and Linda moved to Roseburg, Ore., in 1973, to Phoenix, Ariz. in 1983, to Redding, Calif. in 1993, then back to the Rogue Valley in 2003 where he enjoyed the last years with family and friends. Ben is survived by his wife, Linda J. Dirksen, 86; their son, John Dirksen, 60; and their daughters, Sue Dirksen, 57, Paulette Joy Lovely (husband, Will), 53, and Janet Cook (husband, Jack, 52), 51; 12 grandchildren; and 18 great-grand children, all residing in Oregon. Also, his sister Betty Jane Vanderbilt, Ind. and his brother Henry Dirksen, South Holland, Ill. Preceding him in death was his sister, Georgia DeVries and grandson, Kyle Cook. Ben and his wife Linda had 65 wonderful years together. He was a loving husband, father, grandfather and friend to many. A memorial service, officiated by Pastor Johnny, will be held at the home of Jack and Janet Cook. 2848 Bailey Ave, Medford, Ore., on Sunday August 5th at 3:00 p.m. All are welcome.

Ben Dirksen Ben Dirksen, 86, of Medford, Ore., went to be with the Lord on July 29, 2007, in his sleep, at their home. Ben was born to Garrit Jan Dirksen and Hendricka Marie Houbolt on February 27, 1921, in Brooten, Minn. He grew up in Roselin,... View Obituary & Service Information

The family of Benjamin Dirksen created this Life Tributes page to make it easy to share your memories.

Send flowers to the Dirksen family.