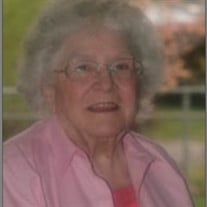 Barbara Marie McKee, 87 of Ashland Oregon, peacefully went to the Lord on Tuesday, October 7, 2014. She was born on September 10, 1927 in Medford, Oregon to Rupert B. and Zita M. Maddox. On May 15, 1948 she married Douglas McKee who preceded her in death after 64 years of married. Her grandfather was August Singler, the first law officer to lose his life in the line of duty in Jackson County. Barbara graduated from nursing school March 1945 and worked at Providence Hospital. Barbaras greatest joy was spending time with her family. Being a grandmother was the highlight of her life; she loved supporting all of their activities. She enjoyed painting, reading and music. Survivors include her children; Marie (George) Tiger, Talent; Doug (Kathy) McKee Jr., Medford; Julie (Steve) Thomas, Central Point and Dennis (Debbie) McKee, Medford. Her siblings; Ray Maddox, Terry (Shirley) Maddox, Dacy Maddox, Kareen Powell, Zita ( Clyde) Smith and Diane (Jim) Walker. She had 6 grandchildren and 5 great grandchildren. She is proceeded in death by her parents Rupert and Zita Maddox, Joseph McKee (son) and Rupert (Bud) Maddox (Brother). She lived at Skylark Assisted living for the last 2 years in Ashland and they became her extended family and treasured her like a grandmother. Rosary Vigil will be held at Hillcrest Memorial Park 2201 N. Phoenix Road, Medford, Oregon from 5-7 pm on Friday, October 17th. The Memorial Mass will be at The Shepherd of the Valley Catholic Church, 600 Beebe Road, Central Point, Oregon, and Saturday, October 18th at 10 am. Memorial Contribution in Lieu of flowers to the American Heart Association. Arrangements by Hillcrest Memorial Park and Mortuary. 541-776-6162. www.hillcrestmortuary.com

Barbara Marie McKee, 87 of Ashland Oregon, peacefully went to the Lord on Tuesday, October 7, 2014. She was born on September 10, 1927 in Medford, Oregon to Rupert B. and Zita M. Maddox. On May 15, 1948 she married Douglas McKee who preceded... View Obituary & Service Information

The family of Barbara Marie McKee created this Life Tributes page to make it easy to share your memories.

Send flowers to the McKee family.