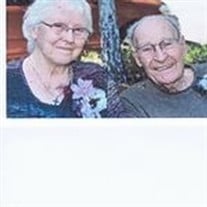 Alice Linnie Hess, 93, of Grants Pass, OR. passed Saturday, March 20, 2010 at her home. She was born March 23, 1916 in Forest City, MO. to George A. & Dollie(Waggoner) Stroud. On Nov. 24, 1934 in St. Joseph, MO. she married Charles Leonard Hess who preceded her in 2007. They came to Medford in 1984 then on to Grants Pass in 2005. She was a homemaker and spent her life caring for her family. Alice enjoyed gardening and was a member of the Rogue Valley Bible Chapel and the Gideons of Medford. She is survived by two sons; Kenneth Hess of Redding, CA., Steven Hess of Grants Pass, OR., three daughters; Jean Anderson of Lincoln, CA., Sharon Jenkins of Parkdale, OR., and Cheryl VanDyke of Talent, OR. 15 grandchildren, 35 great grandchildren, and 4 great great grandchildren. Alice was preceded in death by her parents, husband, grandaughter Melanie Hess, two sisters Marie Fitts and Ruby Stout, three brothers Russel, Leo and Lawrence Stroud. Funeral services will be 11:00AM Friday, March 26, 2010 at the Hillcrest Memorial Chapel, 2201 N. Phoenix Rd, Medford. A visitation will be held Thursday, March 25, 2010 from 3:00PM to 7:00PM. Alice was a gentle soul, loved by all who knew her. Hillcrest Memorial Park & Mortuary in care of arrangements.

The family of Alice L. Hess created this Life Tributes page to make it easy to share your memories.

Send flowers to the Hess family.