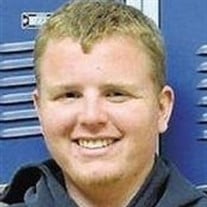 After a decade of fighting cancer and participating in five experimental cures, 21-year-old Adam Bradfield of Medford passed away Tuesday with his family at his side, leaving a Facebook reminder to "live strong," adding that he "gave it one hell of a ride." A 2008 graduate of Phoenix High School and active in Future Farmers of America, Adam seemed victorious in an earlier, three-year bout with leukemia but in 2005 he was hit by an onslaught of bone cancer, with tumors growing around lungs, hips and sciatic nerve. The disease, called osteogenetic sarcoma, led to a full hip replacement, a femur transplant and the removal of part of a lung. In a Mail Tribune article last December, his mother, Robin Bradfield, told of raising funds to take part in experimental cancer-fighting tests at the University of Texas. So rapid was the growth of his 22 inoperable tumors that Adam couldn't make a trip that far away, she said, but kept going every weekend for treatments in Portland. "None of the experimental programs worked," she said. "Some might work at the beginning but would stop working. Three weeks ago, the doctors said they couldn't do any more for him. Adam said he wanted to come home and die." Adam was in a coma in the final days of his life, waking up for a large family gathering, his mother said. Twenty minutes after almost everyone left, he slipped away. In January, Adam married Kayla Roberts, who he met at FFA. His Facebook page is filled with the comments of many friends and family members, before and after his death, praising his positive attitude and calling him a beautiful and inspiring leader. In his final Facebook postings last week, Adam praised the fettuccine his dad prepared and said that when things get you down, "u got to look at all the good things that have happened and remember u gave it one hell of a ride! No regrets, no fear and most of all livestrong!!!" Robin Bradfield, a hairdresser with Salon Jane in Jacksonville, says she's missed a lot of work and faces considerable expenses for recent treatments, though insurance covered most of them. Adam was covered by Social Security Disability and the Oregon Health Plan. Funeral expenses exceed $7,000 and donations may be made to the Adam Bradfield Fund at local Sterling Savings Banks. A spaghetti feed at Phoenix High School last fall raised $3,000 and a fund drive last winter raised a similar amount for final attempts to rid him of the cancer, she said. Funeral services are at 1 p.m. Sunday at the Phoenix High School gym, with a reception following. In addition to his mother, Adam is survived by adult sisters Kelley Robertson and Erika Bradfield, brother Jacky Hawkins, 9, father Erik Bradford and grandparents Ed and Sharon Bradfield and Richard and Janet Pudder, all of Medford. "He'll really be missed," said his mother. "He was really amazing." Hillcrest Memorial Park & Mortuary, Medford, OR. are in care of arrangements. www.hillcrestmortuary.com

After a decade of fighting cancer and participating in five experimental cures, 21-year-old Adam Bradfield of Medford passed away Tuesday with his family at his side, leaving a Facebook reminder to "live strong," adding that he "gave it one... View Obituary & Service Information

The family of Adam Richard Bradfield created this Life Tributes page to make it easy to share your memories.

After a decade of fighting cancer and participating in five experimental...

Send flowers to the Bradfield family.